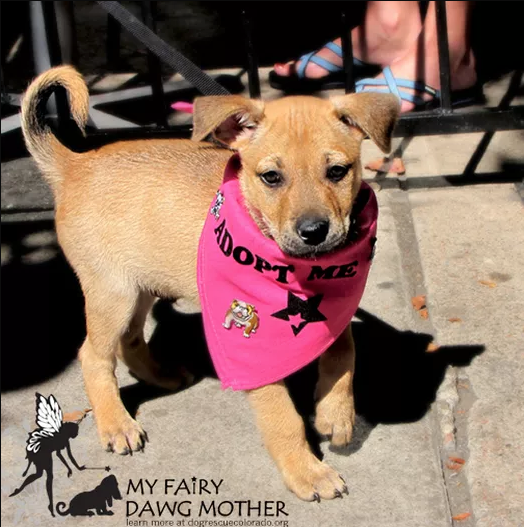 The Fairy Dawg Mother is more than just one person. She’s an idea, a team, and a movement. We can’t do it all alone, and our foster parents are the most important part of our team.

Our ‪#‎tbt‬ ‪#‎throwbackthursday‬ for this week is a bit of a long read, but is totally worth it, which is why we brought it over to the blog from Facebook. What our fosters go through is hard, but also so very rewarding. For a glimpse of that life, check out Jeni’s story of her first foster puppy through My Fairy Dawg Mother:

Magnus was the first puppy that I ever fostered. I told myself from the beginning that I wasn’t allowed to keep him and when he arrived I knew that was going to be an incredibly hard thing to live up to. Magnus was this tiny, needy, sassy little thing that I immediately fell in love with. He was too young to really grasp training basics like sit and stay, but we worked on potty training and being ridiculously cute. He got a hang of both real quick.

It didn’t take long for someone to take interest in Magnus, which wasn’t surprising, and I had my first experience with a meet and greet with a potential adoptive family. I was incredibly nervous. How was I going to determine if these people were a good fit for this tiny little dog and how was I going to actually give him up? A man and woman came over and we talked about all sorts of things as they became enchanted with Magnus. They both grew up with dogs, they had a baby, really liked Magnus and I gave them a glowing review when Nikki called to see how it went. They filled out an application and went through the steps to adopt Magnus and we set up a place to all meet to take their new baby home. And after they left, I cried. So much. I knew the moment was coming and that I had done everything I could for this pup and loved him as much as I possibly could. I knew that I had helped make a positive change in this dog’s life but that didn’t stop the tears. I kept trying to convince myself that everything was as it should be and everything would be great.

I got a call from Nikki the next day. Magnus turned out to be a little “too much puppy” for the adoptive family. He was only 8 weeks old, I’m not really sure what they were expecting. They decided that they did not want to keep him. I was baffled, but almost relieved to get my little puppy back.

A couple of fosters decided to get together with our dogs and have a couple drinks on a patio and get some exposure for the foster pups. I lived a few blocks from where we were going to meet up so I decided to try to walk Magnus on a leash. The first time I clipped the seemingly huge and heavy (super tiny) leash on him, he gave me a look that said good luck with this. We made it about 2 blocks before I picked him up and carried him. It was a good first try.

I passed an acquaintance on the street and he joked that he was pretty sure I should be walking my dog not carrying him. I laughed and explained that we were still working on the whole walk on a leash thing, and that he was a foster dog looking for his forever home. His eyes got huge and he said that he and his girlfriend were looking for a new dog, and Magnus would be perfect. I knew that this guy had an amazing dog, a very well-mannered and loyal Shar Pei that was almost always at his side. I got really excited that he was interested in Magnus. I let him know what the next steps were in the adoption process.

My anxiety started to mount again but at least this time I knew that I would still run into Magnus out and about. We set up a time for an official meet and greet with his girlfriend and when that time came, I waited. And waited. They never came. I couldn’t believe that someone could pass up on Magnus’s sweet face and not want to take him home and keep him forever. It turned out that his girlfriend had found a dog at a shelter that she fell in love with the same day that her boyfriend had met and fell in love with Magnus. At least a dog was saved, even if they did flake out on Magnus. So once again, I am alone with Magnus. I cuddle him in my arms and look at him and can’t help but wonder if I am supposed to keep this dog. So what if I foster fail on my first puppy.

The next day, Nikki called to give me information about someone else that would like to meet Magnus. She was a friend of a friend of My Fairy Dawg Mother and if she was interested, she would be allowed to take Magnus overnight. When I opened the door for Rachel and James with Magnus in my arms, Rachel squealed with delight and somehow this time I knew for real (super real) that this was what Magnus needed. It was love for all of them. Granted, that didn’t make it any easier when they left. Do you know what does make it a little easier? Another foster puppy. Helping another dog find its home and keep the cycle of love going. It never got easier for me to let a foster dog go, but it was also a wonderful feeling connecting the right dog with the right people.

And lucky for me, Magnus is still a part of my life. Rachel called a month or two after she adopted him to see if I’d like to come over for a visit. I was elated. And when I saw my little beast and how big he had gotten and what a happy little prince he had become it made every bit of sadness that I had over him leaving disappear. The kisses that he gave me felt like thank you’s. Every time I see Magnus it reminds me how glad I am that I started fostering and working with My Fairy Dawg Mother. In Rachel, Magnus found his forever home, I found a friend and My Fairy Dawg Mother found a fantastic volunteer.

The more fosters we have, the more dawgs we can save.  Are you ready to learn more? Want to foster a dawg? Contact MFDM today!