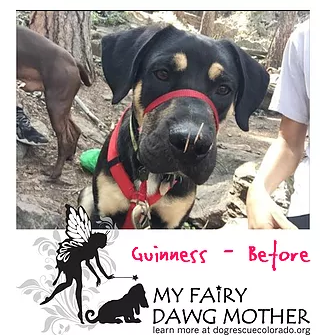 The Fairy Dawg Mother has to praise the effort of two heroes today: Guinness, a dog adopted from our program, and Joshua Chavez. Read on to find out why:

Jenna Castello and her friend Joshua Chavez were hiking in Deer Creek Canyon with her family dogs Bagheera and Guinness. As they passed by the early season brush, the terrifying sound of a startled rattlesnake rang out through the air.  The snake was coiled and ready to strike, and Jenna was the target.

Guinness, a 50 pound hound dog that the family had rescued from My Fairy Dawg Mother, leapt into action, jumping between Jenna and the snake. His face took the first strike, getting the full brunt of the snake’s venom.  Because a snake will continue to strike until they no longer feel threatened, Guinness was also bitten in the leg. Jenna was able to pull Guinness back from the snake, removing him from danger.

Joshua picked up the 50 pound dog and ran back to the car, rolling his ankle and falling several times on the rough terrain. They managed to get Guinness to Deer Creek Animal Hospital within minutes, saving the dog’s life.

Because of the early spring weather and sunny, warm days, snakes are coming out of hibernation. They are often found sunning themselves on rocks, or lying in open areas just off the trail, where they can get maximum exposure to warmth. When startled, rattlesnakes will sound the alarm with their signature rattle, before coiling up to strike. People are often able to respond and remove themselves from harms way, but dogs and cats are known to pursue the threat instead, which often leads to bites.

What to do if your dog is bit by a rattlesnake:

First and foremost: Do not let the dog move around. You may want to run back to the car, but carrying your dog is going to be the best way to get back. Reduce the movement of the dog’s muscles and strain on the dogs heart, to prevent the circulation of the venom through the dog’s system.

Get to a vet immediately. Dogs bitten by snakes have a survival rate of 90%. That rate plummets to 45% after 4 hours, and steadily declines. In addition to the anti-venom treatment that the vet will administer, pain management will be important to prevent the dog from going into shock.

Call ahead, so the vet will know you are coming and can be prepared.

Antivenom (antivenin) can be a key component of patients require antivenom treatment. The choice to administer antivenom is based on the clinical symptomatology of the individual patient.

Since the most common mechanism of death from rattlesnake bite is circulatory collapse, IV support and monitoring for signs of blood pressure drop are important. Fluids may be started at a relatively slow rate if the patient is stable but if signs of impending trouble occur, circulatory volume replacement is as easy as opening a drip set valve. After a bite, 24 hours of observation is a prudent timeframe while giving IV fluids throughout.

There are numerous misconceptions about antivenin. The first is simply the name of the product. It is not anti-venom. It is not a single injection that provides the antidote to snake bite venom. Antivenin is a biological product consisting of antibodies made by horses in response to exposure to four common Crotaline venoms. The antibody serum is reconstituted into an intravenous drip that is run into the patient over at least 30 minutes or so.

Antivenin is helpful in inactivating snake venom but there is a narrow window during which it must be used. After about 4 hours post-bite, antivenin is of minimal use. Antivenin is expensive (at least $400 per vial) and a large dog with a severe bite is likely to require several vials.

Corticosteroids seem like they would be helpful as they are universally anti-inflammatory; however, their use has been associated with higher mortality rates so they are not generally used.

Blood transfusion may be necessary if life-threatening blood loss has occurred. Antibiotics are often used to control secondary infections. Medications to control pain are important for snake bite patients. [4]

There are some vaccination options available. Red Rock Biologics has a vaccination against the venom of the Western Diamondback which also offers good cross-protection against numerous other venomous snakes native to areas outside California. Since December of 2004 it has become available nationwide. [5]

What to Watch Out For:

Rattlesnakes typically are active in summer evenings just as the sun is going down. However,  they also like warm days. As a cold-blooded animal, they need the heat of the sun to help them generate warmth. Especially in Colorado, where we have warm days in the winter and spring, rattlesnakes may be found sunning themselves on rocks, or sitting under shrubs. Typically, rattlesnakes want to avoid predators who can easily spot them, so they are most often encountered around rocks, in sandy pits, or uneven ground where they can find a place to hide.

Colorado is home to about 30 species of snakes, and only three of them are poisonous – all three are rattlesnake varieties. Prairie rattlesnakes are found across the state in nearly every type of habitat below 9,000 feet. The Western rattlesnake mainly occurs along the Colorado/Utah border. The massasauga is a small rattlesnake found on the sands of southeastern Colorado. [6]

Rattlesnakes are a type of pit viper found throughout the Americas from Canada to Argentina. The pit viper family is identified by their common trait of a heat sensing receptor (the pit organ) on either side of their head, which enables them to strike with accuracy at a moving target with a temperature difference of less than 0.2 degrees than their surroundings. As ambush predators, these snakes typically lie in wait for their prey. When startled, they will attack the threat, forcing venom into the victim after their first strike as a defense mechanism. They will continue to bite as a secondary defense until the threat is removed.

Thanks to Dr. Monica Watterud of Hampden Family Pet Hospital for her research to supplement this post.

[1] Coagulopathy is a condition in which the blood’s ability to clot (coagulate) is impaired.