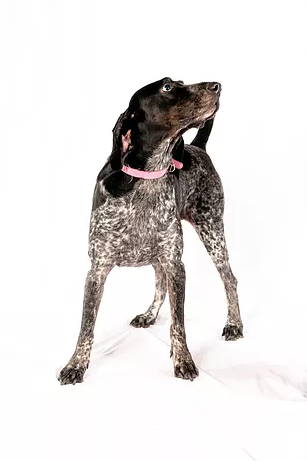 In Native American medicine cards, Dog is praised for his loyalty to mankind throughout time and honored for his diligent service to mankind. Ancient writings mention the Dog as protector of Hell and guarder or secrets. You and I both know this to be accurate, but I think it is so much more than that.

This is the first picture I saw of Rily. I’d just volunteered to start fostering dogs–whatever that meant–and practically shaking with excitement, I set off for transport pickup 2 ½ years ago. Her name then was Miss Molly and I knew she was weird from the second she got off the truck. She’d come from New Mexico after being abandoned. Rily is the strangest dawg I have ever met. With one droopy eye and perpetual humping fixation, she’s the epitome of odd. She farts. All the time. Her big ears perk up, she cocks her head to the side, plops her butt down, and just lets it rip. I believe that Rily would probably be diagnosed on the Autism spectrum if she were human. She rarely responds to social cues, has howling tantrums for what is sometimes no reason, and generally separates herself from interaction. I immediately fell in love with her quirkiness—her ability to take space and set boundaries, the fact that she can be found in a ball napping 90% of the day—it was all so charming.

I loved her deeply, but was determined not to fail on my first foster. After her being returned from two adoption attempts, I knew I was done for. Two separate homes had not seen the incredible spirit I saw in this dawg and I couldn’t bear to see her rejected by a third. I adopted Miss Molly, and to mark the new start of her life, I asked her what she’d like to be called. “Marilyn,” she responded, “to be classic and beautiful as the legendary Monroe.” Then she hopped up on my leg to twerk out another gas bubble and we decided on Rily, a shortened version to honor the goofball inside of her.

Rily Jean is an integral part of my household, and even through all the trouble she gets into, I can’t imagine my life without her. She regularly reminds me of how grateful she is to be here, making us laugh exactly when we need it most. Even after being left behind and rejected multiple times, her capacity for forgiveness never shriveled. The medicine cards also say this: “If Dog has been yelled at or paddled, it still returns love to the person who was the source of its bad treatment. This does not come from stupidity, but rather from a deep and compassionate understanding of human shortcomings. It is as if a tolerant spirit dwells in the heart of every canine that asks only to be of service.”

I have seen this many times over in the world of dog rescue, but what is incredible to me is that Rily is still here. It is our mutual respect and appreciation for one another that has formed our permanent bond. Even though it was not me who neglected or abused Rily, I don’t think anyone would fault her for losing trust in humans as caretakers. But lucky for me, she’s a dawg, and dawgs don’t do that. She gracefully grants me forgiveness as I do her when she gets in to the trash on a daily basis. She has a role and a purpose in our pack, just as I found meaning in caring for her.

Thank you Miss Rily Jean, for everything you have brought to my life; and to the Fairy Dawg Mother, who blessed my world with everything that comes with fostering dawgs.